I am the Far Northwest Side reporter for Block Club Chicago, covering the Far Northwest Side neighborhoods of Portage Park, Jefferson Park, Norwood Park, Forest Glen and Sauganash. previously was a freelance journalist who wrote for the Chicago Reader, WTTW News, Streetsblog Chicago, Eater Chicago has been published in Insider, Chicago Tribune, Latino USA, Univision Chicago, Curbed, Newcity and more.

Originally from New Mexico and a first-generation Italian-American, her reporting focuses on communities, social justice, arts and culture, immigration, equity, food and more. She attended Columbia College and graduated with a bachelor's degree in multimedia journalism. Outside of journalism, she loves to bike, cook, read and say hello to other people's dogs. 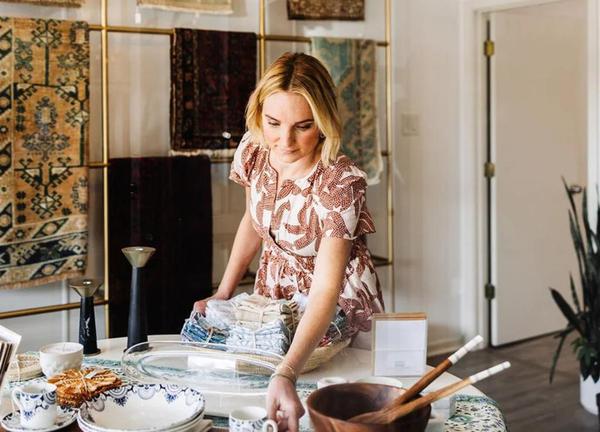 PORTAGE PARK — Business owner Kelsey Haywood opened her housewares and gift shop last year at Six Corners, providing high-quality goods to help people make their homes cozier. But business has been so slow Haywood hasn’t made an in-person sale in about eight weeks, she said. The shop by haywoodmade, 4942 W. Irving Park Road, is one of several Northwest Side businesses that have seen few or no sales in about two months, worrying owners. 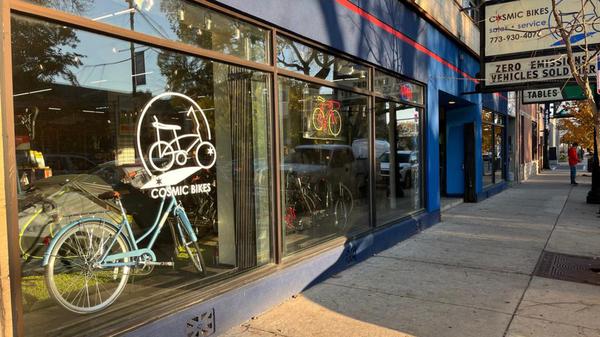 JEFFERSON PARK — A national program to deliver meals to people in need for the holidays is pedaling through the Far Northwest Side this year. Cosmic Bikes, 4641 N. Milwaukee Ave., will host a Cranksgiving ride Nov. 20. The event will get cyclists out to buy food that will be delivered to New Hope Community Pantry, 6125 W. Foster Ave., ahead of its big Thanksgiving meal giveaway. 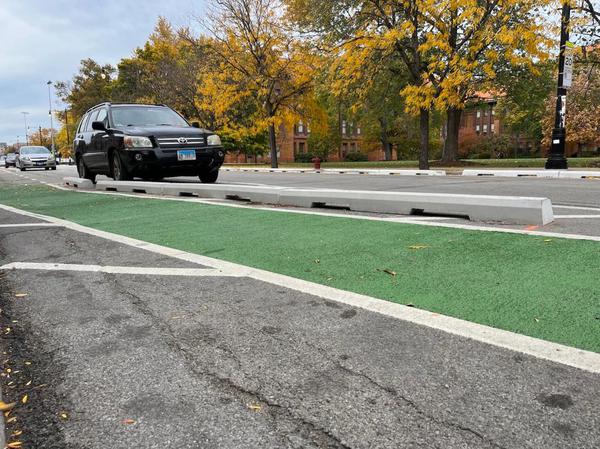 Concrete-Protected Bike Lanes Come To Milwaukee Avenue On Northwest Side, But Some Are Already Damaged

OLD IRVING PARK — Concrete-protected bike lanes are being installed along stretches of Milwaukee Avenue, but the barriers are already showing damage. Small concrete barriers were installed last week on parts of Milwaukee Avenue starting at Addison Street, a component of the city’s promise to improve infrastructure for bicyclists in an area that has seen two fatal crashes in the past five years. The barriers, which have so far been installed sporadically from Addison to Kenneth, replace the pai 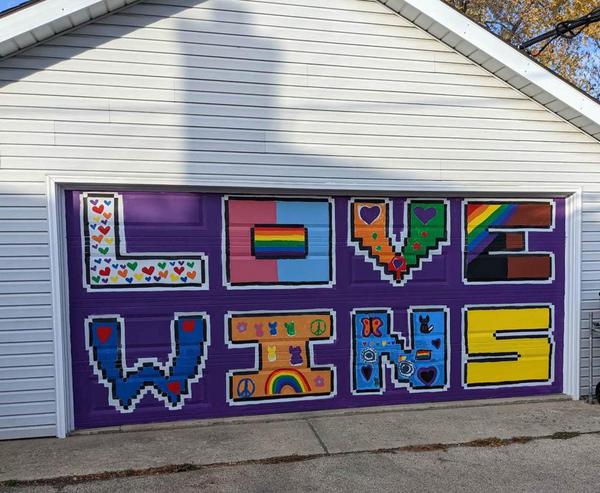 After Jefferson Park Home Hit With Anti-LGBTQ Vandalism, Neighbors And Cops Step Up To Help

JEFFERSON PARK — A group of Far Northwest Side neighbors have a message for the person targeting a home with hate crimes: Love wins. Erica Hungerford’s home has been damaged and vandalized with anti-LGBTQ and political messages five times since May. The family, who moved to their home near Bryn Mawr and Milwaukee avenues less than a year ago, said a man has damaged their Pride flag, spray painted conservative, far-right slogans on their garage and left political harassment on their property. H 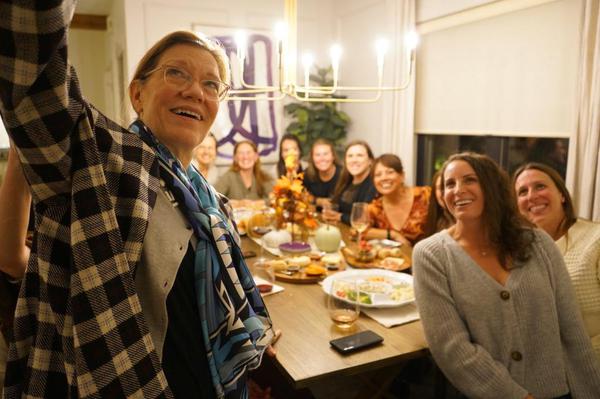 This Northwest Side Neighborhood Group Has Hosted Monthly Meetups For 60 Years: 'It's Timeless'

OLD IRVING PARK — Once a month, the women of the 3800 block of North Kildare Avenue have a big party. The Old Irving Park block party has been a tradition for 60 years. The women make up the Kildare Coffee Klatch group, which started in 1962 under a woman on the block eager to meet her neighbors and welcome them to the Northwest Side. The group, which has about 18 members, celebrated its 60th anniversary in September. Its roots run so deep that women on the block say attending is a rite of pas 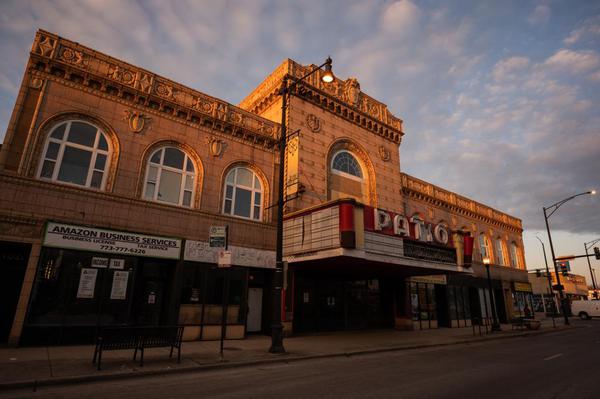 After A Pandemic Slump, Portage Park's Patio Theater Ready To Create Its Next Chapter

PORTAGE PARK — After hanging on for two-and-a-half years, the historic Patio Theater is bringing back more events, concerts and other shows as entertainment life reawakens. Like many music venues, the nearly 30,000-square-foot theater at 6008 W. Irving Park Road closed its doors at the start of 2020 and only reopened at the beginning of the year with in-person performances and COVID-19 guidelines. But they’ve not yet returned to staging the number of shows in a consistent schedule as before the 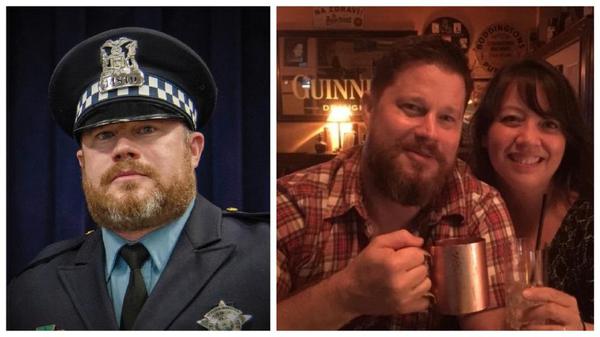 Officer John McKenna Mourned By Friends, Family And Those He Helped: 'He Was A Stellar Human Being'

PORTAGE PARK — Friends, loved ones and neighbors have rallied around the family of a Far Northwest Side police officer who died unexpectedly last week. John McKenna, 50, of Portage Park, died in his sleep Sept. 26, according to his wife, Rebecca McKenna. He was healthy but had heart issues compounded by the daily stresses of the job, Rebecca McKenna said. John McKenna worked in the 11th Police District on the West Side for 19 years, his wife said. His friends and family said he was a loyal fri 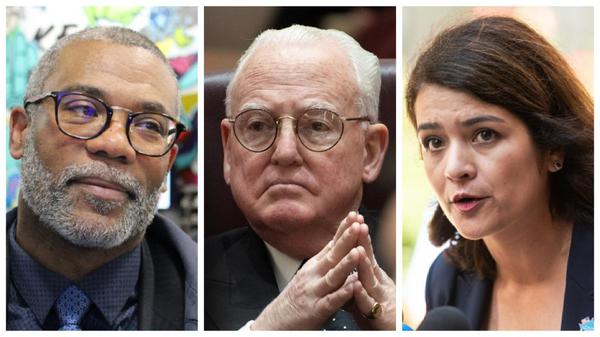 How Much Does My Alderman Make? Here's A Complete List

CITY HALL — Most City Council members will be getting a sizeable raise come 2023. There are 15 aldermanic salary ranks, according to public salary data from the city’s Human Resources department. Not everyone on the council earns the same because they can accept or decline raises over the years, and the raises are tied to the consumer price index. Earlier this month, alderpeople — who technically hold part-time positions — were tasked with accepting or denying raises again. Those who accepted 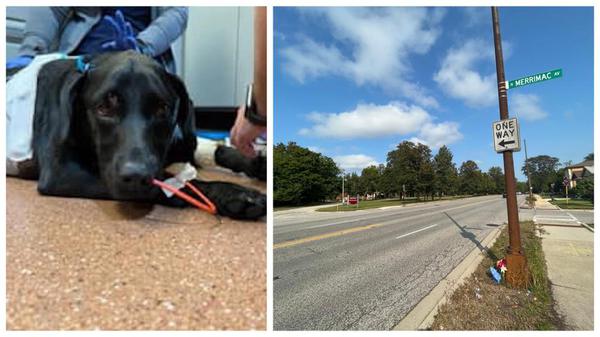 NORWOOD PARK — Neighbors are raising money to help with a dog’s recovery after a driver hit her, her owner and another dog this week in Norwood Park. The dog is hospitalized with serious injuries; its owner was also hospitalized in critical condition, and the other dog died. The surviving dog’s vet bills are expected to cost more than $20,000 — but neighbors have donated, and a local animal foundation is chipping in. People can donate to the foundation online so it can help pay for the dog’s c 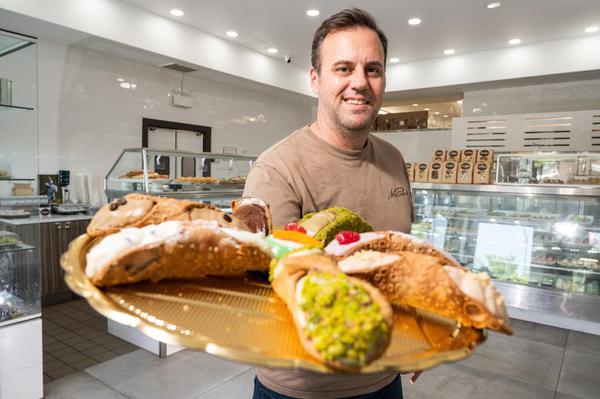 GLADSTONE PARK — A longtime Sicilian bakery has opened another outpost — 5,000 miles away, on the Far Northwest Side. New Paradise Bakery, 5742 N. Milwaukee Ave., is a gelateria, bakery and deli led by owner and chef Vito Rubino, whose parents are from Palermo, Italy. After running a pizzeria in Logan Square, he formed a partnership with the New Paradise Bakery owner in Palermo and wanted to bring its Italian delicacies to the United States. “It’s been a dream of mine and my father’s to incorp 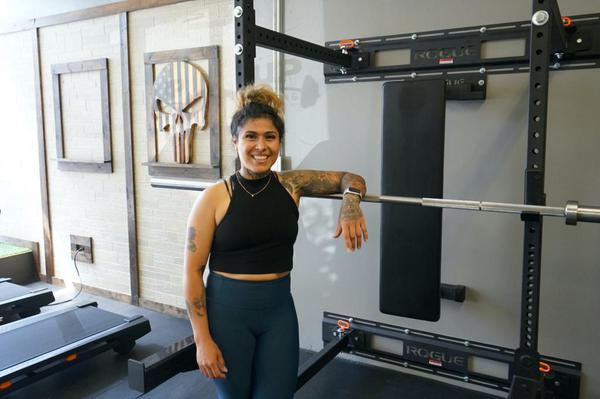 This Six Corners Trainer Started Out Of Her Basement. Now, She's Getting Women Into Powerlifting And More At Her New Gym

PORTAGE PARK — Maritza Camacho’s dream of opening her own gym is finally a reality in Six Corners after five years of planning and dreaming. Camacho opened Uplifting vGym, 4906 W. Irving Park Road, at the end of July after it took off virtually during the pandemic. But even before 2020, the personal trainer longed to have her own gym and help people get into powerlifting and women’s fitness, end stigmas and boost self-confidence in a specialized setting. Uplifting vGym combines all the facets 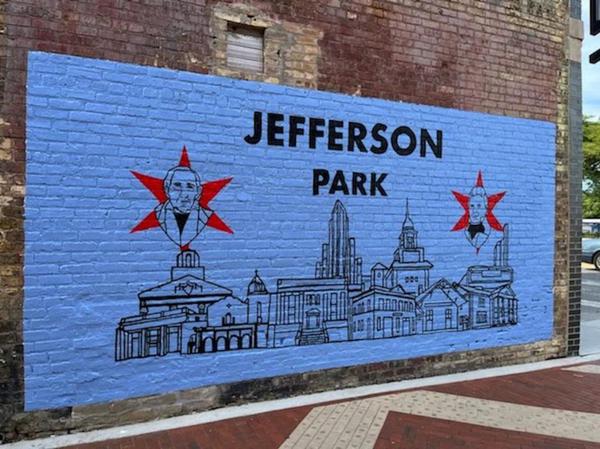 JEFFERSON PARK — Downtown Jefferson Park has a new mural showcasing the neighborhood’s historical buildings and founders. Work on the mural began Monday and was completed Wednesday afternoon, said Susanna Ernst, who facilitated the project and is a member of Jefferson Park Forward and a co-founder of the Northwest Chicago Historical Society. Painted by AmeriCorps volunteer members with the educational program City Year Chicago, the art sits in the alley plaza at 4870 N. Milwaukee Ave. between 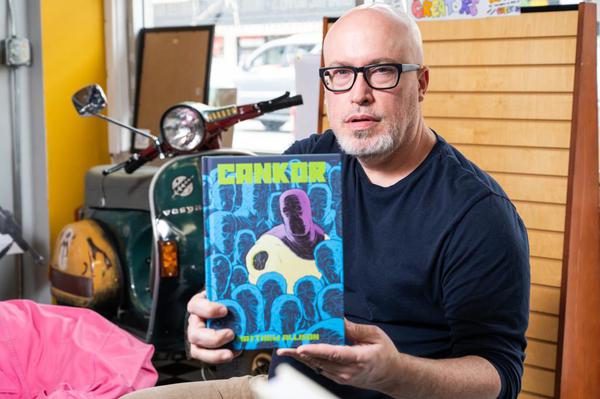 PORTAGE PARK — For nearly two decades, Matthew Allison ached to publish his personal work, be a full-time artist and connect with his readers. The illustrator, who grew up making art and reading comic books, began working at a print shop when he was 20 years old after his mother saw an ad in the paper. A visual artist herself, she thought it could be an in for her son to publish his work, Allison said. “It took me 18 years to print a comic book because I got fully immersed in printing,” said A 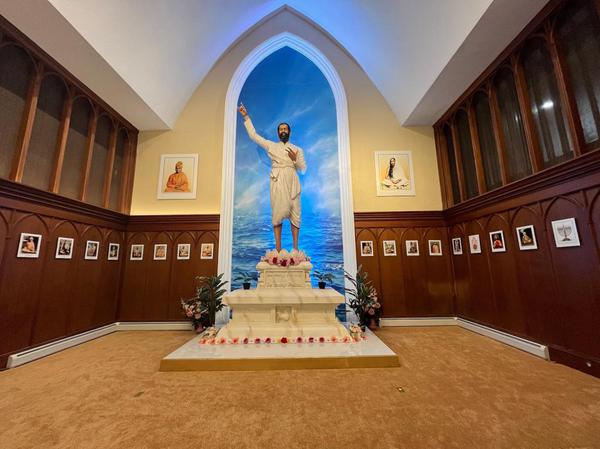 IRVING PARK — A spiritual center and ashram is now open in the former Irving Park United Methodist Church following a building renovation — and delays caused by the pandemic. The Vivekananda Vedanta Society of Chicago, a nonprofit based in suburban Homer Glen that practices the teachings of Indian philosopher Swami Vivekananda, took over the historic campus at 3801 N. Keeler Ave. at the end of 2019 from the Irving Park United Methodist Church. The campus was home to the congregation for more t 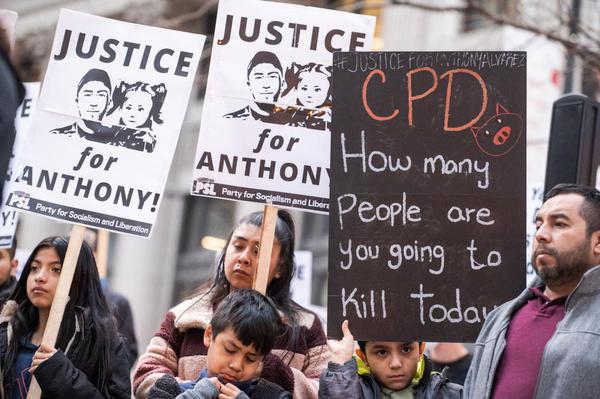 Cop Who Killed Anthony Alvarez Should Be Fired, Oversight Agency Said. He Was Suspended For 20 Days Instead

PORTAGE PARK — Police officer Evan Solano, who shot and killed Anthony Alvarez during a foot chase last year, will keep his job after the Chicago Police Board refused calls from the police oversight agency and Alvarez’s family to fire him. The board handed down its decision Thursday, suspending Solano and his partner, Sammy Encarnacion, for 20 days each for their actions in the March 31, 2021, shooting. The Civilian Office of Police Accountability had recommended Solano be fired and Encarnacio 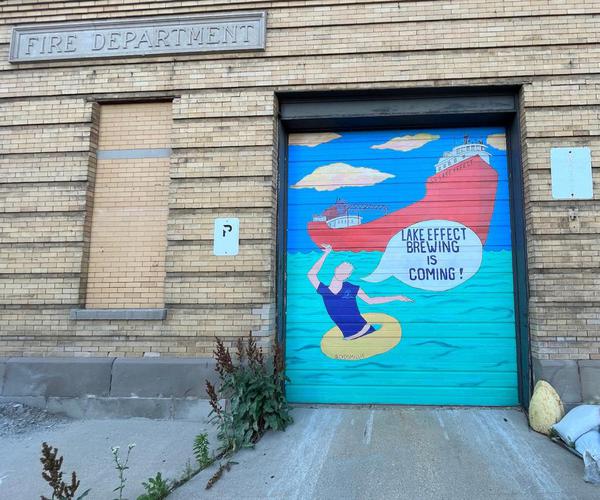 After Lake Effect Brewery Calls Off Jefferson Park Plans, Neighbors Ask: What Will It Take To Keep Promising Businesses?

JEFFERSON PARK — Far Northwest Side neighbors are disappointed and frustrated after Lake Effect Brewing Company bowed out of plans to open a taproom in a historical neighborhood firehouse, joining a line of businesses pitched for the area that never opened their doors. 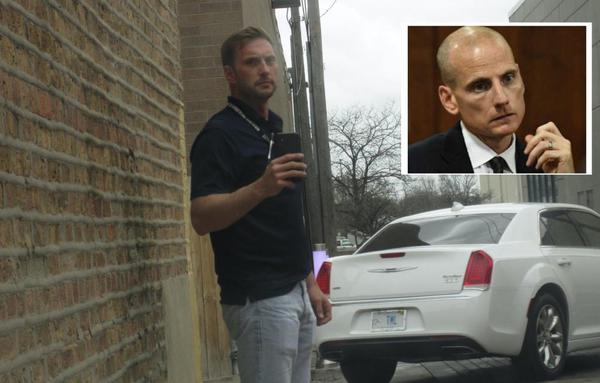 JEFFERSON PARK — A Northwest Side ward superintendent facing federal charges for allegedly attempting to sell an illegal machine gun has been fired from his job. Charles Sikanich, Ald. Jim Gardiner’s ward superintendent who oversaw sanitation services in the 45th Ward, was fired from the city’s Department of Streets and Sanitation, spokesperson Mimi Simon told Block Club. Sikanich was fired last week and his position has yet to be filled, Simon said. The former ward superintendent had been on 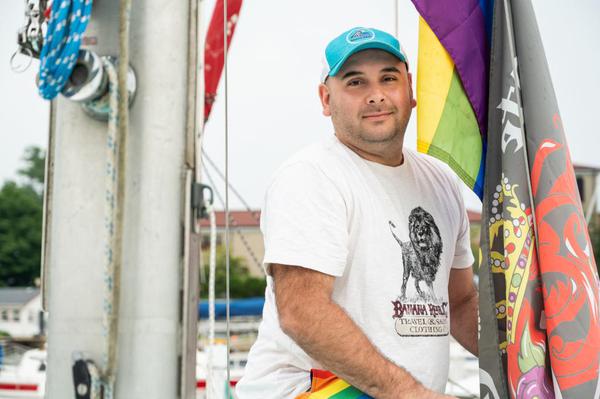 JACKSON PARK — Charles Szymanski, a fixture of Chicago’s LGBTQ sailing community, was used to having people approach him for lessons. He always said no; he wasn’t a teacher and didn’t have a boat to teach on. But the messages kept coming. Now, with a donated boat and a passion to introduce more people to sailing, Szymanski is ready to pass along what he knows. His nonprofit Rainbow Races, which promotes equality and awareness in sailing within the LGBTQ+ community, is starting an LGBTQ sailing school. 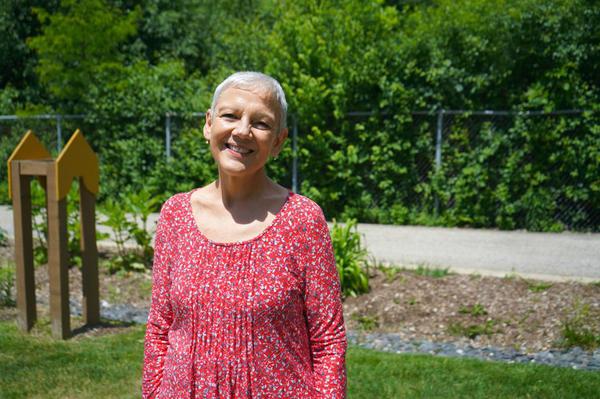 NORTH PARK — Karren Ray might need to rearrange her home to make way for all the cards and gifts she’s received from students and staff as she prepares to retire. Ray, 66, the principal of Northside Learning Center High School at 3730 W. Bryn Mawr Ave., is retiring this month after four years on the job and 30 years with Chicago Public Schools. The beloved leader and educator received a stack of signed cards, paintings, photographs and well-wishes at the school’s last assembly of the year. 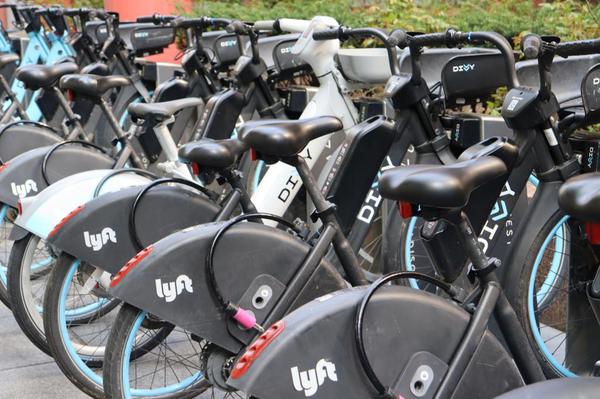 CHICAGO — Mike Hightower began using Divvy’s electric bikes about a year ago and “fell in love” with the bike program, signing up for an annual membership. Hightower’s 5-mile commute from Avondale took him through the city’s fee “waiver zones,” giving him 45 minutes on the bike at no extra cost before per-minute pricing began. But Divvy’s new pricing structure eliminates the waiver zones for e-bikes, making longer rides more expensive. It also increased per-minute fees for e-bikes, added a lock
Load More Articles
Close ✕